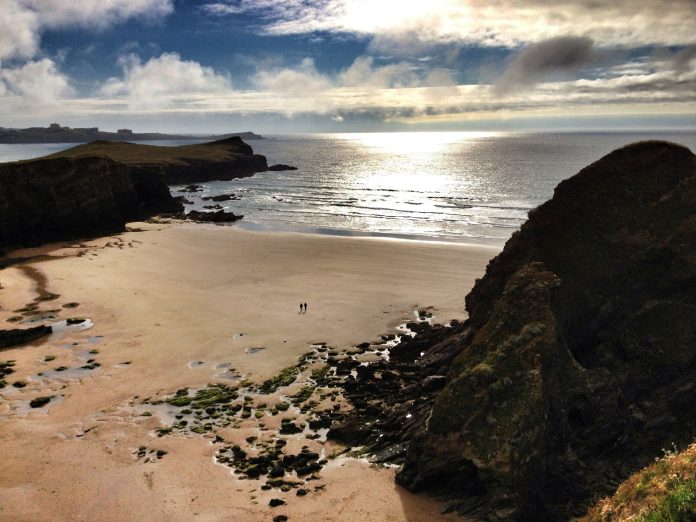 To have a restful and quiet time, the perfect place to go to is Whipsiderry Beach. Located just to the North of Newquay, between Watergate Bay and Porth Beach, this one is a hidden beauty for sure and it has been voted in the top 20 of Europe’s beaches by The Sunday Times. It has over a 600 meter long coast. Whipsiderry Beach derives its unique name from mining terms ‘Whips’ and ‘Derrick’. The only way to reach the beach is through a long flight of steps (with handrails) which has been carved out of the cliffs.

Along this stretch of coastline you will find ‘Fruitful Cove’ along with the a large cave known as ‘Cathedral Cavern’. There is a large rock in the middle of Whipsiderry Beach which is called ‘Black Humphrey Rock’ and is allegedly where Black Humphrey, a famous smuggler, used to hide!

Since there are no facilities at Whipsiderry Beach, it makes it less crowded, making it ideal for reading a book or spending some precious private time. Despite it’s secluded position, there are still hotels, holiday cottages and flats available nearby, thus eliminating all worries about places to reside. Also, there are other beaches nearby such as Porth Beach, Lusty Glaze Beach and Great Western Beach, to name a few of them.

The beach is below some of the steepest, sheer cliffs in the area so be careful when trekking along the coastline nearby. You also need to be mindful of the high and low tide timing as during the high tides Whipsiderry Beach all but disappears. You must also remember that lifeguards are not available here.

The following hotels are within walking distance to the beach. Click the images for more details or to book directly with booking.com.

Organise an Unforgettable Newquay Hen Party Organising a Newquay hen party has long been a tradition and this small but explosive party town has built a reputation...

ABOUT US
Newquay Nightlife is the premier guide to the world class resort of Newquay, Cornwall. If you have any feedback, if there is anything you would like us to cover or if you'd simply like to say hi, please get in touch.
FOLLOW US
© 2021 Newquay Nightlife