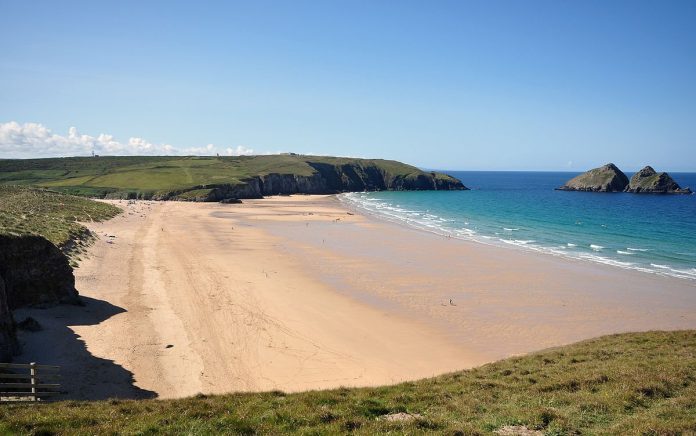 Holywell Bay is an open sandy beach located on the North Cornwall coast, approximately 6 miles west of Newquay. Its situated near the Holywell Bay Fun Park as well as Crantock Beach and Perranporth beach. The bay is easily accessible by road with plenty of parking, but expect a short hike from the car park to the beach. This is an ideal beach for families, especially during weekends and holidays when the kids are off school. There are plenty of sand dunes and you will normally find kids (and adults) jumping from the top and tumbling down. Also the dunes are great for using a bodyboard to surf down the sand – a seriously fun way to spend part of the day.

Holywell Bay is a name thought to be derived literally from a “Holy Well” – a cave on the northern side of the bay, only accessible at low tide. The rocks form a series of basins due to its unusual formation. It’s said that in the past, mothers would take their sick children and bathe them in the water. Another unique land form found on this beach are the twin rocks known as “Gull Rocks” or “Carter’s Rocks”.

As you’d expect, the beach offers some jaw-dropping scenery. Seen from a far distance, one can mistake it to be the main beach in the area due to its numerous sand dunes that are visible from afar, with expansive distances of beach formed by the golden sand that stretches for many miles north east. This sand dunes are a favourite for the visiting young children who spend much of their time in the sand with buckets making sand castles. The dunes form excellent rock pools as streams meander along the sand.

The Holywell Bay offers a range of activities from surfing, swimming and water skiing. For those who love golfing there is an 18 hole golf course within the area that overlooks the beach. Also at the nearby Holywell Bay Holiday Park, kids are able to enjoy outdoor games such as football ,basketball, netball and table tennis.

Holywell Bay is home to some world-class hotels, resorts and lodges due to it’s prime location. Some of our favourites include:

Things to Do in Newquay

Organise an Unforgettable Newquay Hen Party Organising a Newquay hen party has long been a tradition and this small but explosive party town has built a reputation...

ABOUT US
Newquay Nightlife is the premier guide to the world class resort of Newquay, Cornwall. If you have any feedback, if there is anything you would like us to cover or if you'd simply like to say hi, please get in touch.
FOLLOW US
© 2022 Newquay Nightlife